You might think I’m less angry with Phil less because I’m off the hook and my little Milo is not a lemon. (Rather, his owner is.) But Phil cost me a tow. For a battery! 🙂

I HAVE HAD IT!

It’s official, he’s a lemon. I’ve spent over a thousand dollars in less than 3 weeks! This time, it’s “E” for Electrical (and Expensive), because he wouldn’t auto-lock either (and I just replaced the starter).

I feel like crying. I’ve been without a car for 6 years. I could have saved the multiple thousands of dollars I’ve poured into the purchase and maintenance of this ugly piece of scrap metal and gone to freaking Europe already!

It has been awfully convenient. I’ve been eating healthier because I can make more frequent trips to Whole Foods, which isn’t close. Being lazy, I didn’t always want to bike over.

I took one trip to Idaho to see my grandma, but overall I have to admit… NOT WORTH IT. I could just take the shuttle up north like I have for the last six years, and… what? Go to Europe already!

Phil is such a jerk. He helped me pick out the car. And he’s a mechanic! In fact, the car shopping experience was the beginning of the end for us, because he was just such a jerk! He was completely irritated, put-out, and rude. If you don’t want to help, don’t say you will and then act like a victim! He wouldn’t render even the slightest opinion.

“What do you think about this one, honey?”

“Right. I know nothing about cars. I was hoping your expertise could wisely direct me? Whadya think?”

“I don’t know what you want. I can’t make the decision for you.”

“You do know what I want. This price range, 4 doors, something you might trust. Would you get this for yourself? For your mom? That’s what I want.”

Our first fight ensued. The second came a couple weeks later. He’s so wrapped up in himself it doesn’t occur to him to see another’s needs. When I communicated those needs, he simply did not care.

So we broke up. That’s cool. It happens. Today, I asked for his help. I figure it’s been long enough. He’s moved on. I’ll offer to pay him, and get a little savings. (He lost his job while we were dating and the grapevine let me know he’s still not working.) I texted a humorous plea, “… Sincerely, Old Christie 🙂 ” (His new gal is a Christie/y)

OK, that’s fine. (Immature and petty, but fine. And stupid! You need the money, you baby!) I texted again. “If not, no biggie, but please let me know so I can arrange a tow, etc. Thanks much, hope you’re well. Cheers, C”

Just a jerk. I don’t understand people who can’t be civil when a relationship ends. So we weren’t a forever match. So what? I’m always glad for a connection, even a fleeting one. “We really liked each other once. That rocks!” I don’t get stupid people.

So I have a stupid car I officially regret. In fact… I hate him. Yes, I said it. I hate you, MILO MILO MILO! Pththth!

I bought a new used car on October 30th. He has a sticker that reads “MILO MILO MILO,” and so earned his name and gender. We broke down today. Sixty-five bucks to tow to Big-O, dreaded diagnostic tomorrow. Come on, Milo! Come in under $300. You can do it!

Good Milo. And let’s be honest. He’s not the first to act up. The first thing I did after bringing him home was remove the driver’s side mirror with the pole to my parking canopy.

Well, I’m screwed. In class yesterday, the instructor taught a formula that shows how investments grow over time, with the last “doubling” being the one that makes you a millionaire and sets you up for comfortable retirement. “This demonstrates the importance of investing early,” he said. “The last 7-year growth cycle is crucial. It’s literally the difference between investing at 35 and 40.”

and chosen filthy lucre instead.

I forgot I have a class tonight. I’m taking a 3-wk. course, “Understanding the Stock Market,” through my alma mater, University of Utah, at the end of which I shall purchase my first share in some publicly traded corporation or another.

I feel so grown-up! It’s high time at 39. I did the same thing when I was 25. “Oh my god, mid-twenties!” I felt I had none of the trappings of adulthood: husband, babies, degree. So I bought a condo, which housed me for 9 nine years until I sold it – literally 2 weeks before the housing bubble burst. I made a bundle and rid myself of all consumer debt, which I have never reacquired. I think I’m going to be very good at this.

I’ll visit with the Lord another day. 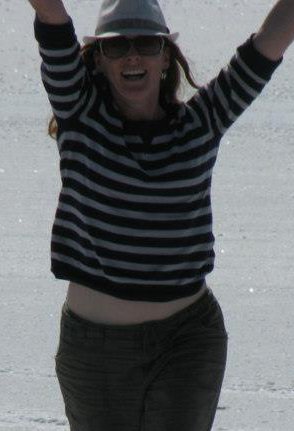 Life has lived me. Now I flip that.